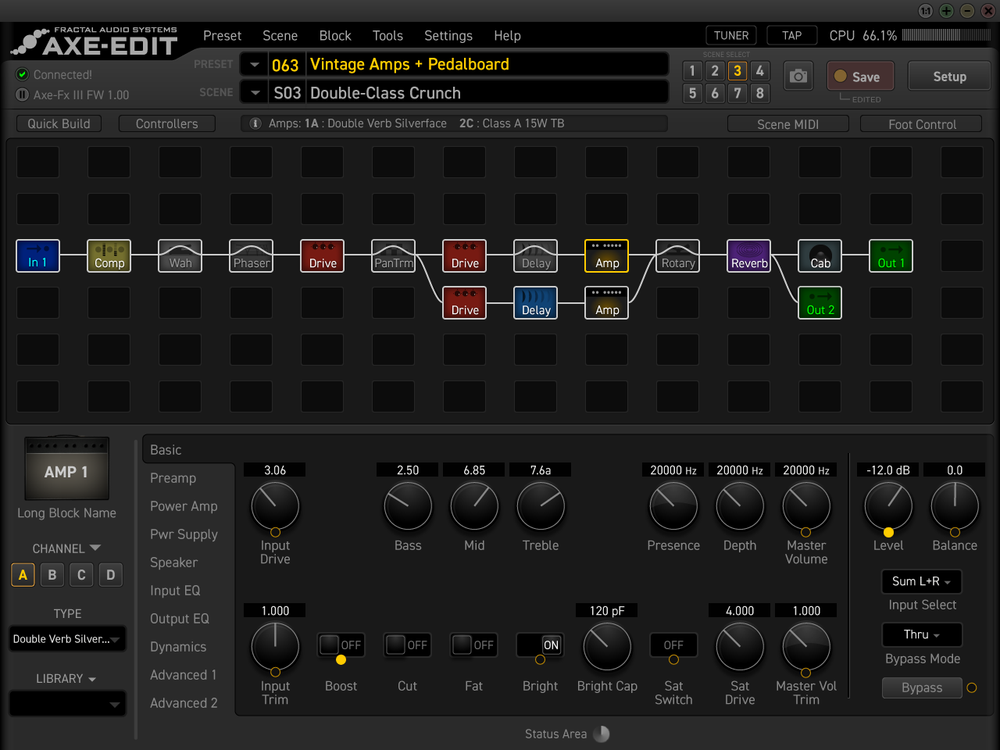 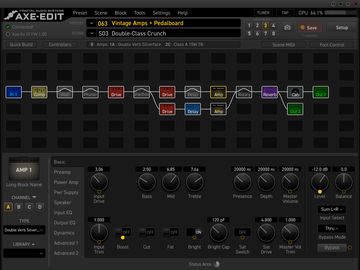 Now with a three year warranty!

I want to thank you very much for all your work in producing and delivering such a wonderful piece of equipment. It is truly a marvel to live in a time where products such as this are available! The quality of sound is incredible and the range of tones possible is mindblowing. So much to explore and get into!! WELL WORTH THE MONEY!!

This might be the first time that I've purchased a piece of music equipment (other than my Korg Kronos) that feels "future proof". The UI has improved dramatically, the power has quadrupled and it's still quite portable for a studio rack mounted style device. Paired with an FC12, you have a crazy number of possibilities at your fingertips (actually your feet but i digress...) for any live performance needs. If you are thinking about purchasing one of these, don't fret, you are making a long term investment. This kind of power at your disposal is mind boggling and whilst I had to sell a kidney to pay for it - it was well worth it. Besides, you have 2 of them, you can live without one ;) #imkidding I have owned an AX8 and whilst that is still the king of portability, if you were ever frustrated by the CPU limitations (amongst others) then this is the gear for you. It will be interesting to see if the FM3 ticks the portability AND the ares amp modeling sound to boot - until then, the Axe FX 3 reigns supreme. The long and short - its highly recommended and Andrew and the team at Independent have fantastic customer service, so after sale support ticks all the boxes too.

Before moving over to the fractal world I had stacks of different amps and pedals, and was consistently buying and selling to seek "the tone" I was in the mood for at that particular time. Once I got my axe FX 2 several years ago I was set - I had access to more amps and pedals then I could use in my life and I could even record them directly without needing to crank up the volume! The axeFX3 takes everything the 2 did well and makes it better! The sound and feel has progressed, the new FX are killer and the UI is a massive step in the right direction. Strongly recommend to anyone who spends any amount of time playing guitar (whether a bedroom warrior or a pro musician) as it is the best investment you can make - it will make you want to play more!

Well, I knew it was going to be good but, not quite THIS GOOD! This is truly a game changer. P.S. I'm now using my Helix floor as a controller while i wait for the FC12 ;)

Most amazing guitar gear I have ever purchased in 30 years. The only thing that comes close is the Axe FX 2! You will not regret investing into this device - it is the gift that keeps on giving and will make you smile every time you turn it on. I cannot recommend the Axe Fx 3 highly enough and the service from Independent Music is second to none. What are you waiting for?

When the chance to ride the bleeding edge of technology comes, it is only those who fear what they may lose over what they might gain who falter. When amp modeling first appeared it promised much but delivered uncertainty, and to a crowd who prize authenticity above all else. We want the amp that Angus played. We want the effect that Vai used. We want Eddie's secret sauce. Modeling promised an affordable, all-encompassing utility to capture, reproduce and re-imagine the greats of guitar signal greatness. But there were question marks. Revisions were made, products developed, endorsements sought and provided. Amp modeling had broken through the technical barrier into the inner sanctum of guitar signal processing in the ears of those whose opinions we trusted to validate the emergence of modeling as legitimate. in and of itself. One by one the famous artists embraced their famous tones through modeling, and their fans just kept on coming. Was it a tube stack? A fridge-sized rack monster? You surely couldn't get decades of guitar signal processing and amplification nuance in one single box overnight. Right? Right. The Axe FX III from Fractal Audio is the culmination of countless man-hours of research, development, and testing to rival space travel. Attention to detail is overwhelming, audio purity is astounding and creative options are boundless. It's like walking into your guitar hero's studio and firing up their rig. But it's every hero, every rig, every mainstream and obscure detail to be tweaked to their (or your) requirements. Integration of the Axe FX III into new or existing studio recording environments is painless and intuitive. The unit is dynamic and flexible, and there are a host of online resources and communities to assist, backed by a developer famous for their commitment to their customers re product development and improvement (future-proofing with firmware and software updates), as well as a loyal user base intent on sharing ideas, patches, and how-to's. All in all, The Axe FX III is a guitarist's dream powerhouse. The amp modeling and FX processing supply tone for days, and the technological capacity and after-market support provide scope for seemingly endless opportunity to sculpt as distinct or recognisable guitar tone as one desires. Superb.

Been wanting to upgrade from Podfarm for a year or so but could never decide what system I wanted (Axe II, kemper etc). They all sounded so good. Then the Axe III came out. It had all the ins and outs I wanted and everything I wanted. I'm still exploring the functionality of the machine, there is so much to it. I'm very happy that I waited to find the right purchase. It sounds awesome!!!

I have only had this unit for a week or so now but from the second I plugged it in it was clearly better than the AxeFx II I had owned previous. Very happy with this purchase so if you have the cash, don't wait

Ive had he Axe II, Axe XL+ and now the AXE3 and just amazed how good this thing is. Don't hesitate to do the upgrade if you can.

Ok, I have only had the AXE FX 111 for a few days, so this is initial impressions only. I have previously owned a series one Ultra, and have been a tube amp (Marshall /Mesa etc) player most of the time. The old Ultra sounded good, but wasnt quite "there" for me, and I now realise that I didnt make the most of it either, due to lack of experience/guidance. I bought the FX 111 based on the great Fx11 sounds and listening to noted local (Aus) users, and for the screen and other hardware updates. I found editing on screen a bit less fun in the old models, but using AXE Edit (Pc/Mac Editor) was always the great option there. At time of writing I haven't yet used AXE Edit on the 111 which is a good thing, as it has forced me to use the onboard editing, which I firmly believe is a great idea if you are going to use the device live. I am using it with Power amp emulation ON, Cab sim OFF and into a Matrix GT1000 FX out to two Ulbrick open back 1X12s in stereo loaded with Vinatge 30s. It just sounds GREAT. If anything I seem to be able to achieve much greater clarity and defined top end without sacrificing ANY warmth. and If I am playing fast passages with distortion, it seems to respond, well,..faster! The patch editing is pretty easy to follow, with the odd check in the manual for something I cant find as a new user. The new screen and changed layout are a HUGE improvement, and its pretty easy to take an existing preset and just swap any part of the signal chain in/out, change amp types etc etc and build your own patch. Some of the presets are just great and usable already. But,,,its all about the sounds in the end.. My wife has spent the last ten years listening to me blasting away in the basement. When she walked in and heard my first patch ( clean Fender Deluxe Reverb ) she couldnt believe it. And the effects are of course, just superb. I play in a Blues band, a Contemp covers band and a Nylon striing duo. Cant wait to set up the banks specific to each setting. My current tube amp is also getting crackly and due for its yearly re - tube ( around $400) so I have a 10 % return already. Happy Boy. W